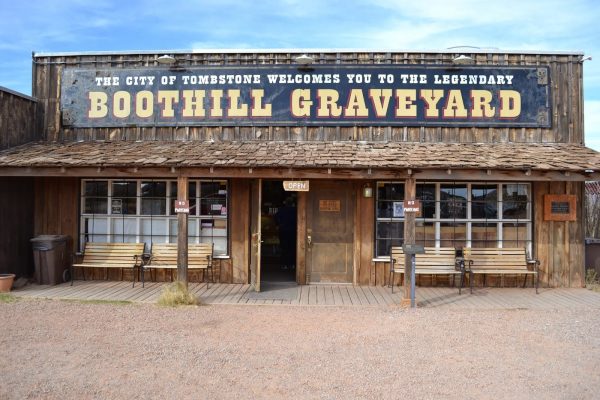 Boot Hill was founded in 1878 on a slight hill just north west of the city. This historical cemetery was the burial ground, for all of Tombstones earliest pioneers.
The name Boot Hill comes from the fact that many of these graves were filled with people that died suddenly or violently with their boots on! Some two hundred fifty known people were buried in Boothill, before it officially closed its doors in 1884.

All of the graves are not marked in their exact location. For many years this famous graveyard sat dormant, falling victim to the many elements. The original wooden grave markers were badly decomposed and unreadable in modern times. Reality is some of the graves could be off a couple of feet, one way or the other, but most are quite close to their exact location. Over the years, Boothill has been extensively studied. The graves not already marked with a headstone, have been remarked close to there original locations, using city records and charts.

Today, many still read unknown, because in the early days people didn’t carry any type of identification. If a man was found dead and not identified by his family or friends, it was customary for the undertaker to display the dead man on a cooling slab in his parlor window, so the towns people passing by could try to identify him.

Some people were only identified or known by their nicknames.   Today, Boot Hill is a favorite stop for Tombstone tourists. It is located on State Hwy 80 in Tombstone, Arizona.

Is Anyone Really Buried in Boothill Graveyard?

Tombstone Boothill Graveyard and Giftshop is managed and maintained by the City of Tombstone.  There is a $3.00 per person entrance fee to the Graveyard.